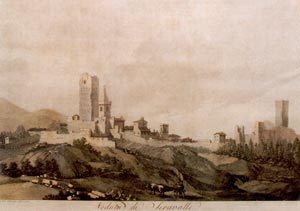 Serravalle is situated in the sloping countryside of the Montalbano, in a natural setting of harmonious appearance.

The area consists of the medieval village of Castellina, Serravalle and Vinacciano on the hills and Cantagrillo and Casalguidi in the level ground with Stella stream.

Although there aren’t Roman and Early Medieval documents, we know that the Roman road “Cassia” went across the area of Serravalle and connected Pistoia to Lucca.

During the XI century, there are more documents which mention the villages of Casale, Castelnuovo and the churches of Marazzano and Castellina. By the 12th century the castle of Serravalle began to assume a particular strategic importance during the battles between Lucca and Pistoia, so that the Comune of Pistoia built wall defences and ramparts. A fortress, whose only a solitary tower remains,  was built in 1140 on the highest point of the hill.

In the period between the end of the 12th century and the first half of the 13th century, Serravalle grew and became one of the most interesting examples of Medieval fortified Tuscan villages. During that time, its role as military base ensured a prominent political role, standing as it did between the opposing factions of the white and black Guelphs. Later on, Serravalle was besieged by the forces 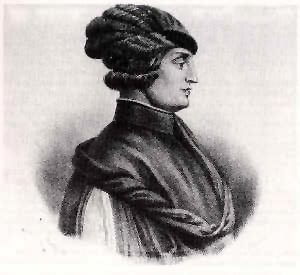 Than, Serravalle was conquered by Castruccio Castracani, who came from Lucca to fight and conquered Pistoia. After his death, in 1328, Florentines and Pistoians followed each other in gaining the control of pass, until Serravalle came under the rule of Florence. From 1351 there were a few of battles.

Now the area of Serravalle is characterized by an economic development thanks to the growing and nurseries in Casalguidi and Cantagrillo. The ancient farming tradition is now developed on the hills, where is still the Tuscan landscape. The current manufacturing sector derived by the handcrafted tradition of the last century. One of the most prosperous activity is that one of  the embroidered sheets.

The legend of Saint Lodovico

According to an ancient tradition of the early XIV century, one day a man and a child passed through Serravalle Pistoiese. They took a break in the castle to beg for charity and they were kindly housed and hosted. So, the child promised that he would remember of their hospitality.

The child was Lodovico of Angiò, son of the king of France and heir to the throne, who would be than Bishop and Saint. He honoured the promise and saved Serravalle from the attack many years later.

In 1306, in fact, the forces of Moroello Malaspina were returning home after they and Florentine ones had besieged Pistoia when they decided to besiege also Serravalle. It was guilty of supporting Pistoia. When the soldiers climbed the walls, the figure of Saint Lodovico appeared in a brightly cloud and armed of a flaming sword on the castle. The scared enemies escaped and came back to their cities.

Saint Lodovico became the Protector of the Castles of Serravalle and an important celebration was established on 19th August every year. The worship to the Saint was so great that, based on a law of the districts, every males born in Serravalle must also had the name of Lodovico.

The celebration has been  an important tradition for over seven centuries and it had been followed with love, handed down from generation to generation.